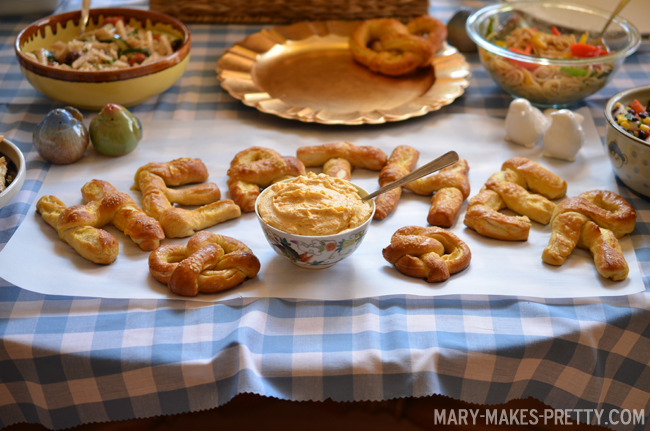 My sister, Heather, is getting married in March! Her story couldn't be much cuter. She met her fella a few years ago during Wurstfest, a massive Oktoberfest celebration that takes place every year in New Braunfels, Texas. Ben saw Heather from acrosss the dance floor, and trotted over to introduce himself. There was dancing. There was drinking. There was even some smooching. Little did she know she was chicken-dancing with the man of her dreams.

Fast-forward to this Fall, when Heather and Ben decided to get serious. After living together for a spell they decided to take the plunge and get hitched. Because they are fun-loving types, they joined in a Scavenger Hunt put on by the Ben Bridge jewelry company. Heather was on crutches, but that didn't stop them from jogging all over the city solving clues, snapping pics, and helping out fellow contestants. They were all about having a good time, and could hardly believe it when their names were called at the end of the race. They won! The prize? A gigantic diamond ring! Ben proposed on the spot, and they've been busy wedding planning ever since. 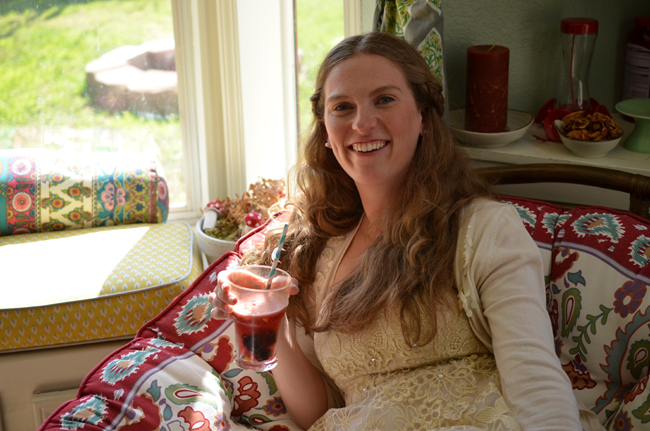 If there is one thing that the sisters McNally love to do together, it's planning parties. Our Great-Grandfather, Poppy, is surely responsible for our deep-seeded love of parties. He was known for throwing the best. Holiday gatherings, birthdays, and dinner parties were more than festive, peppered with party games, beautiful favors, gorgeous decorations, and delicious food. Even us kids had to change for dinner on party days, donning fluffy dresses, ribbons, and bows instead of our usual dungarees.

So, when you give us a reason to plan a party, we kind of go a little insane. (In a good way.) We started out by picking a theme for the shower. Heather collect's H's, so the letter H was an obvious choice. To make the party a little more fun, we added in a picnic theme as well. Heather and Ben are picnic professionals, and are known to spend lazy weekend days sharing snacks in sunny parks.

By the way, their wedding is taking place in the town they met, New Braunfels, with an Oktoberfest themed reception! Adorable! We took her wedding colors, blue, white, and yellow, and used them as inspiration for the party. 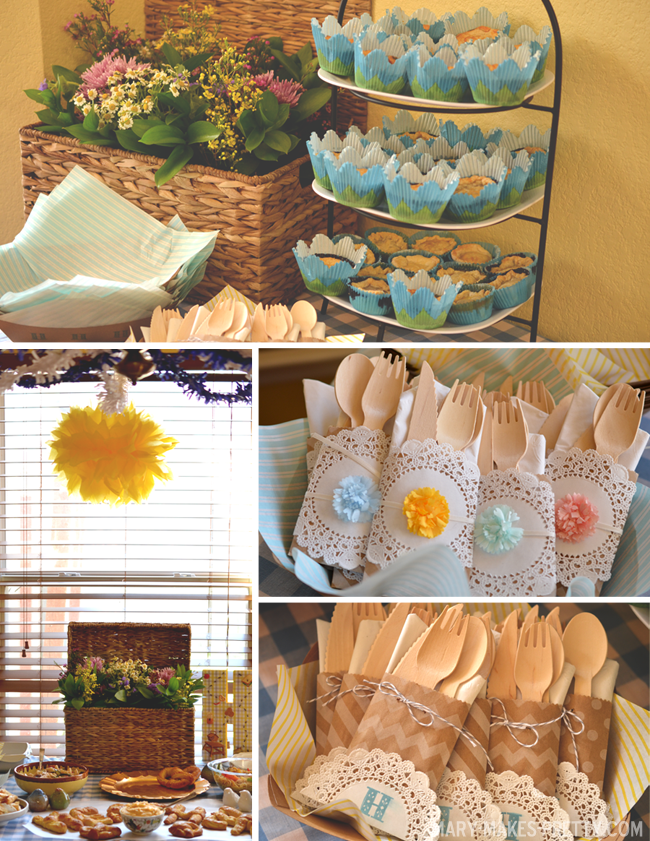 Picnic and Oktoberfest food was on the menu for the sunny, brunch-time party. We served up cold cuts, roasted veggies, hummus, and fancy mustards, and provided freshly baked baguettes for guests to make their own sandwhiches. We also put out some cold salads to add some variety to the menu. Sarah and Caitlin made tiny pies for dessert. My personal contribution was a batch of soft pretzels that spelled out Heather's name! 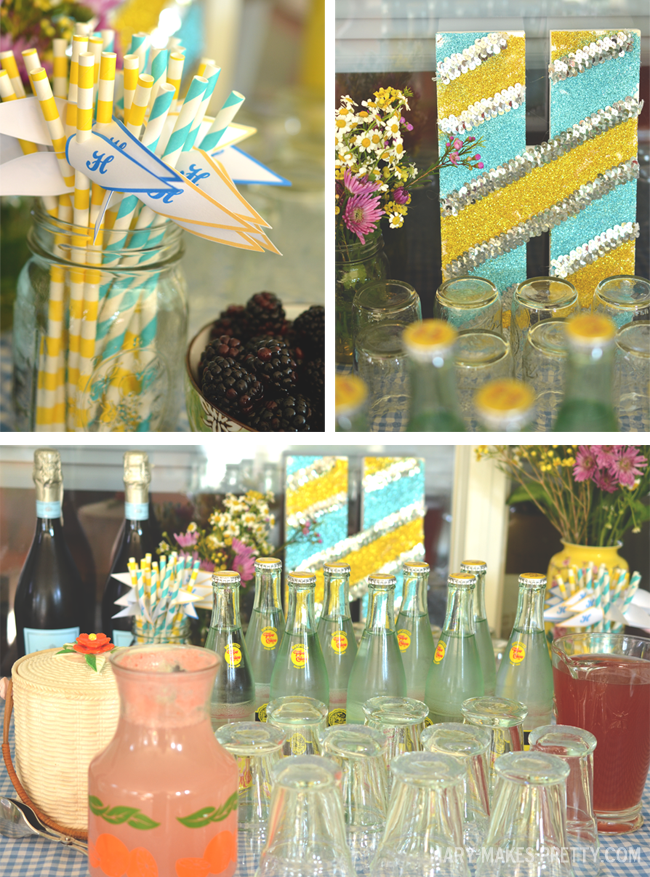 Drinks are always an important part of any party. We offered a few soft drinks including sweet tea, grapefruit soda, and ice water. Our signature cocktail for the afternoon were sorbet mimosas. Each glass started out with a fresh blackberry and a scoop of flavored sorbet (peach, raspberry, and black cherry) and was topped with prossecco. We served them with straws sporting tiny little H flags.

By the way, I got most of our party supplies at the Pink Lemonade Party Shop on Etsy. We served lunch in kraft paper food boats lined with blue and yellow wax paper. Utensils were wrapped up in doilies, stickers, and kraft favor bags. 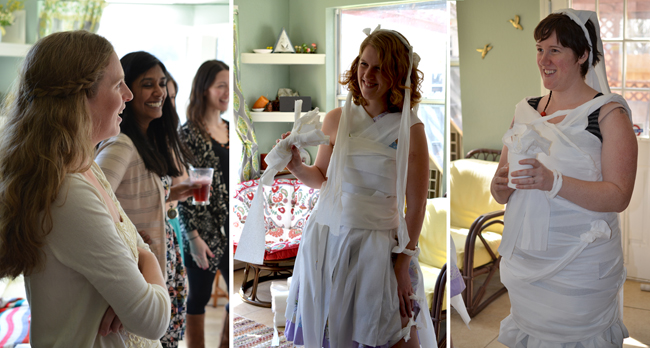 Of course, there were also games! We played toilet paper bride. Caitlin and I were nominated as the models for the two teams of t.p. dress designers. This one is always a lot of fun. Though I think I made a pretty awesome pregnant bride, Caity's team took home the gold. We also did a little quiz to find out how much the guests knew about Heather and Ben. We provided twelve random facts, and asked folks to guess which person they described. 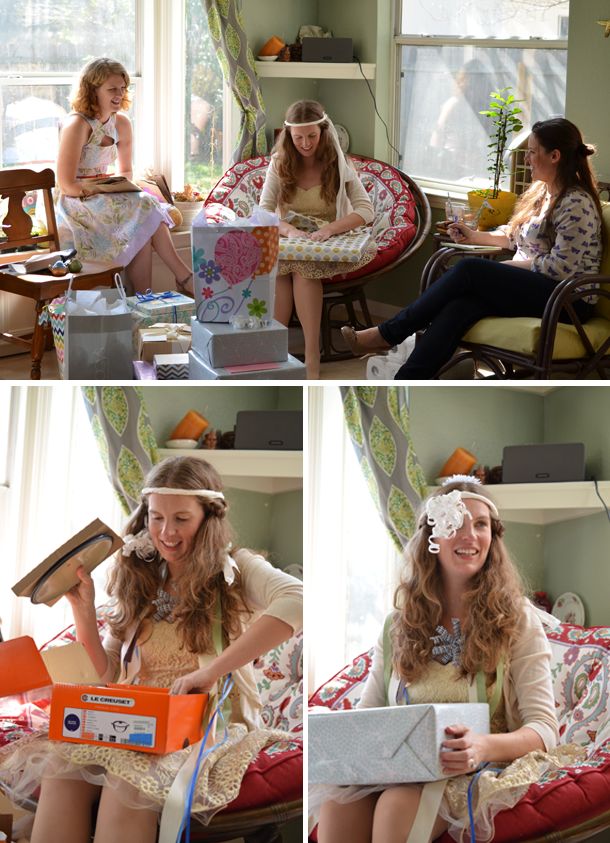 Naturally, there were plenty of gifts. The bride had a grand time ripping through pretty paper and releasing all of her goodies. Per tradition, we collected all of the errant ribbons and bows to make her a lovely rehearsal bouquet.

Note to self: THROW OUT THAT HALF MELTED CANDLE. How embarrassing.

I almost forgot! Sarah created this lovely park picture to use as a guest book. Guests decorated tiny kites and added messages to the picture matte.