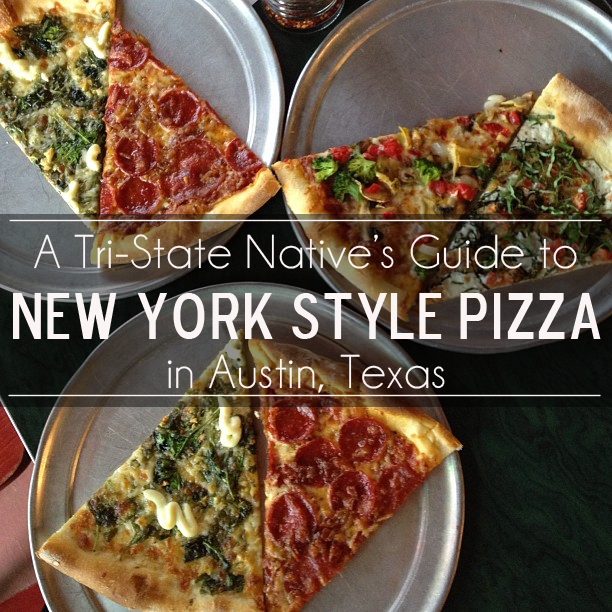 Let's talk about pizza, specifically, New York Pizza. What constitutes New York style pizza anyway? Is it the thickness of the crust, the flavor of the sauce, or the type of oven that it's cooked in? The short answer is "yes". It's all of those things, but above all, it's a combination of textures and flavors that spells out comfort to anyone who grew up in or around New York City.

I was born in Maine, but grew up mostly in Fairfield County, Connecticut and Yonkers, New York. All in all, I spent the majority of my life within an hour of "the city". As you might imagine, I ate a lot of pizza growing up. Apart from the occasional Sicilian or deep-dish pie, New York Style pizza was pretty much it. Everyone had their favorite hometown pizza places, but looking back, you could count on certain similarities in one pie to another.

First and foremost, comes the crust. If you ask me, a good New York style crust should be of a thin to medium thickness, with a dry, leathery bottom. It has to be thick enough to be sturdy in your hand, but thin enough not to overpower the toppings. As a rule, if you can't fold it in half comfortably, it's not quite right. 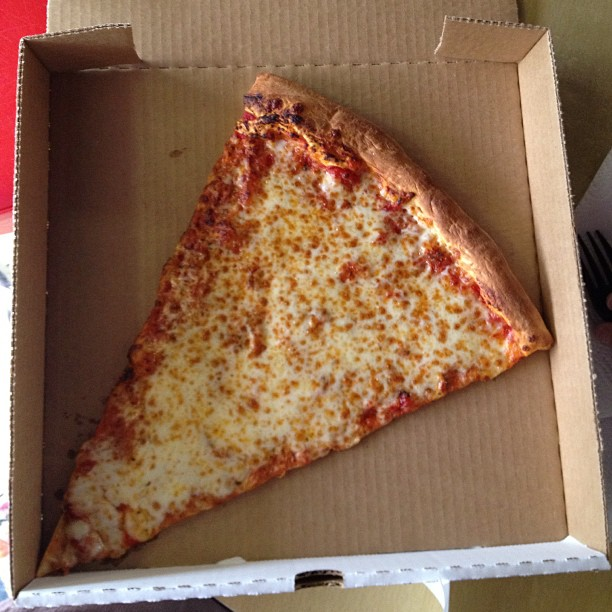 The texture should be soft and slippery beneath the cheese, with the occasional bubble for good measure. The outer crust shouldn't be so thick that it robs the eater of valuable cheese space, but it does need to be round and sturdy, about two or three times as thick as the rest of the crust of the pie. As for flavor, alkalinity is the key, something that you don't find very often outside of the Tri-State area. A great crust is slightly salty, crispy on the outside, and chewy on the inside, kind of like a really great Italian bread.

Next comes the sauce and the cheese. This can vary quite a bit from place to place, and probably accounts for most of what enamors a pizza lover to one pizzeria over another. The preferred amount of sauce on pizza is a hot topic, as is the sweetness and seasoning of the sauce itself. Overall, I'd say a good New York Style pizza sauce isn't overly sweet, but packs plenty of intense tomato flavor. There should be enough sauce to achieve that brilliant slippery texture under the cheese, but not so much that it results in a soggy crust.

As for cheese, quality counts, but it isn't everything. I've thoroughly enjoyed many a greasy cheese slice in my day. Sometimes my favorites were the pies that needed a good blotting with paper towel before the first bite. Still, there is such a thing as going too cheap on the mozzarella. That's where plenty of pizza joints lose me. The thing is, you could have the greatest crust in the world, but if your sauce tastes like ketchup and your cheese looks like it belongs on a Bagel Bite, I'm going to feel like I'm eating in a school cafeteria. That stuff is the pizza of nightmares.

Want to know even more about what makes a New York style pizza great? Check out this amazing piece of pizza journalism from Serious Eats.

So, let's get down to business. Which pizzerias in Austin makes the best New York style pizza? I've joined forces with a crack team of Tri-State natives to see which pies reign supreme.

Here's a look at the team:

Through a long series of double-dates, takeout nights, and pizza-devouring we selflessly put our stomachs on the line to find out if anyplace in Austin was truly doing justice to the New York Style. Here's what we came up with. 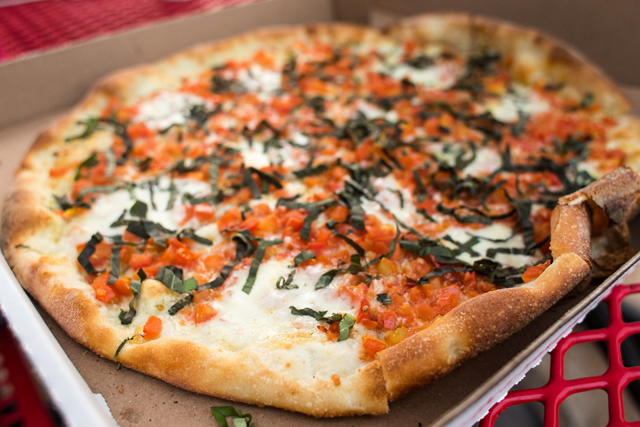 Home Slice definitely wins the prize for best atmosphere. This South Congress institution is a great place to meet up with friends. There is almost always a wait, but you can grab a drink, chill out on the back patio, and chat the time away in relative comfort. The wait being peppered with the aroma of freshly baked pizza doesn't do a thing to hurt the food's reputation either. In fact, I bet that sitting down hungry helps make up for any mediocrity that Home Slice Pizza might be guilty of.

While it burns me a little to pay so much for pizza and salad, the option of ordering family style is awfully endearing. Ordering a large pizza "family style", means that it comes with an enormous house salad to share, and four freshly baked garlic knots. Bread and salad are key to a true New York pizza experience, so I have to give it up to Home Slice in this department.

As for the pizza itself, Home Slice is a great example of displaced New York pizza. The crust, sauce, and cheese are all ALMOST there. The crust is a bit too crispy and airy for my liking, and of course, is missing that magical leathery bottom I'm so obsessed with.

Brooklyn Pie Company recently swooped in and stole my heart for Austin's best New York style pizza. What sets this pizza apart is the crust. I'm yet to find another place in Austin that gets the crust so very right. It has a leathery bottom, a slippery under-cheese layer, and a crispy, crunchy, tasty outer rim. Now and then I've even seen a bubble.

One  complaint I do have about Brooklyn Pie Company is that it isn't entirely consistent. The amount of sauce and bake time seems to vary. To solve this problem I've started ordering my pies well done with a little extra sauce. This seems to be the magic trick that delivers amazing pizza every time.

As a Tri-Stater, my husband just can't abide $18 pizzas. I guess it's just a matter of being incredibly cheap stubborn. So when it comes to lazy weeknight pizza binges, Yaghi's is his top pick. They offer New York style pizza at reasonable prices, and even have coupons for pickup and delivery deals. It isn't the best pizza on Earth, or even in Austin, but it's good, cheap, and fast. In my husband's eyes, that's everything that pizza ought to be.

If you find yourself craving a late night slice while staggering down Sixth Street, head to Hoboken Pie Company. This isn't my favorite New York style pizza in town, but it does have some very loyal fans. Give it a shot. After a few beers, you're almost guaranteed to be into it.

This little pizzeria is located in North Austin. Being the lazy bum that I am, I still haven't made my way up there to investigate. Luckily, Chris and Kristin, two fellow pizza officianados whose opinions I trust indubitably, give it a big thumbs up. Here's a little snippet from Kristin's blog post on Saccone's:

"The cheese is right. The sauce is right. Dear lord, the crust is THIN! And not weird cracker thin. Pizza-folding-thin. There’s nothing about this place that I would change. Except the location. At least 45 minutes from the cool part of Austin, it’s a hike. But a relief to know that in a pizza emergency, I don’t have to get on a plane for a decent slice."

Personally, I wouldn't really lump East Side Pies in as a New York Style Pizza. To me, the crust is too thin, and the toppings are too wacky for a purist such as myself to consider it true New York style pizza. That isn't to say that the pizza itself isn't good. In fact, I'd go so far as to say that it's downright tasty. Steve, my pizza-obsessed brother-in-law loves it enough to call it his all-time Austin favorite. 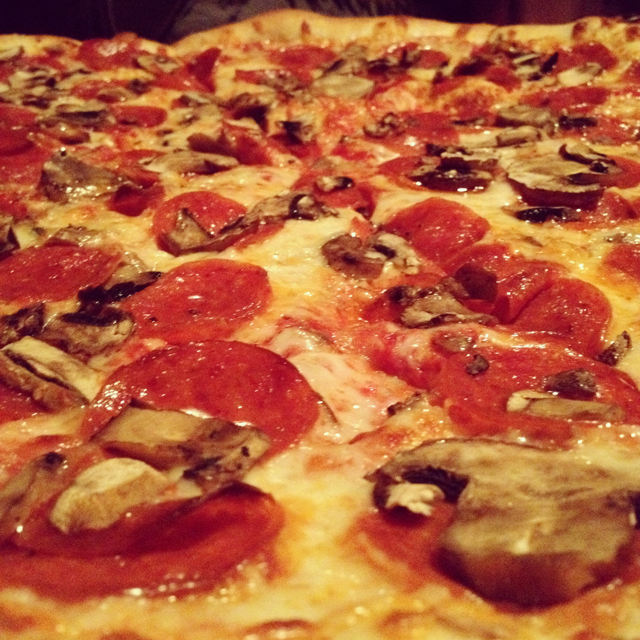 Even though we had a great time finding our favorites here in Austin, we all pretty much agree that nothing truly compares to the "real thing". Personally, I feel like each of these pizzerias come close in their own way, but none of them seem to have the whole package intact. It's like every restaurant holds one precious piece of the New York pizza puzzle. If only we could Frankenstein them together into the ultimate pie.

Of course, this all begs the question, why bother to make New York style pizza in Texas at all? Anyone familiar with the "real thing" knows how little hope there is of someone actually getting it right. A fellow blogger recently compared it to eating Thai food in Venice.

I get that, but for me pizza is a comfort food. When it comes to comfort food we all reach for the version that we grew up with. I'm looking for the pie I counted on every Friday night when my family would order out. I want the pizza that burnt my knees on the ride home through a greasy cardboard box - the easy meal I took for granted whenever life got too stressful or busy to cook dinner.

While I would be the first to admit that there is better pizza in Austin, better isn't always what I want. When I need an emo-pizza fix, only New York style will do. I'm very grateful that there are pizza cooks here in Austin doing their best to warm my heart with a little slice of home.

Let me just say that I love how passionate people are about pizza. It makes me feel less alone in my devotion. After publishing this post, the following places were recommended multiple times by readers, tweeters, and friends. Definitely check these pizzerias out during your pizza journey. I know that Team Pizza will be doing that ASAP.

Want to find more cool stuff in Austin? Visit my I Heart Austin Pinterest board!