Keeping it Real, and an Amaranth Chard Rice Bowl Recipe

I like to think that I'm the kind of person who knows how to stick to her guns, to take a belief to heart and run with it. When I look in the mirror, I want to see a woman who knows what she believes in, and refuses to let the world compromise her. A lot of the time I feel like I'm somewhere in the neighborhood of that goal, but even at my best, I still struggle with maintaining a balance between indulging my ideals and accepting the facts of life. 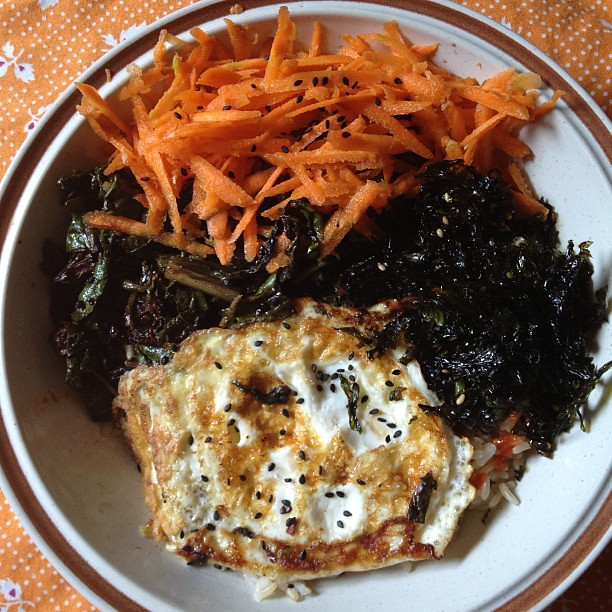 My cell phone, for example, eats at me. I use it all the time. It's a tool for my blog and my job, a favorite toy in moments of boredom, and my golden ticket to an endless library of information. Sometimes I even use it to call or text someone. I can't deny how much I adore my phone, and of course, that bothers me. Such an attachment to a material object goes against the spiritual goals I set as a buddhist. It's very existence, as disposable technology, goes against my beliefs as an environmentalist. Knowing what other human beings are put through in order to supply and dispose of my precious phone strikes a chord with my conscience that is hard to ignore.

Yet, I can't put the damned thing down. I justify it with some vague notion that like my computer, the device allows me to act as a force of good in the world. I remind myself to take that deal seriously and put out content that is more thoughtful, more helpful, and more worthwhile. Similar justifications are made for indulging in the occasional bite of meat or cheaply-made dairy purchase. I tell myself that I am exploring different foods, and Scott often reminds me that we can't afford to "damn the man" at every turn, so I pick my battles one by one, and try to do the right thing more often than not. 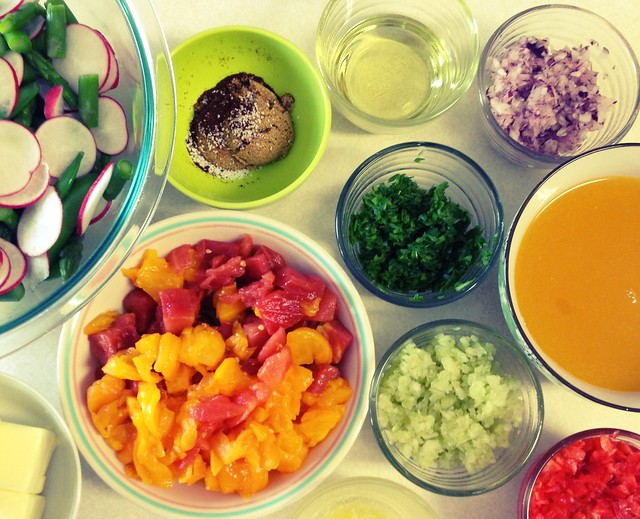 Every once in a while someone dangles something shiny in front of me and I snatch it up without thinking about the strings attached. Let's say, for example, a television production company approaches me about participating in an online event for their popular reality cooking show. I think about how great the exposure would be for my blog, about how many more readers, subscribers, or followers I might get. I even think about how the experience will puff me up, making me look a little bit famous. It's so sparkly!

But then it actually happens, and I feel a knot in my gut. When I'm given a long list of what not to say, not to wear, not to do, the knot gets tighter. I suddenly realize that I am helping to promote something that I don't even like, a show that portrays food and cooking as something difficult and mysterious, as if it only belonged to these shiny special people on TV. I have a personal rule against burning bridges or backing out of things I've committed to, so I go through with it anyway, even though I'm not allowed to mention my blog or my last name, even though the dish we are cooking isn't vegetarian, even though I feel used and stepped on.

Then it is over, and I just feel angry, with the TV people, of course, but also with myself. I just sold myself out for nothing. At least I can say that I learned my lesson: to thyself be true. No more reality shows for this little vegetarian.

Instead of becoming more phoney, I've decided to start getting real. While I will still be sharing plenty of polished and perfect recipes, I'm also going to begin posting about what I'm eating every day. Unless it is for a recipe post, I don't often cook the same thing twice, so these recipes will be shot from the hip. I hope they will inspire you to get in your kitchen and throw something together too.

Go forth and cook, my friends. It's a good day to be yourself. 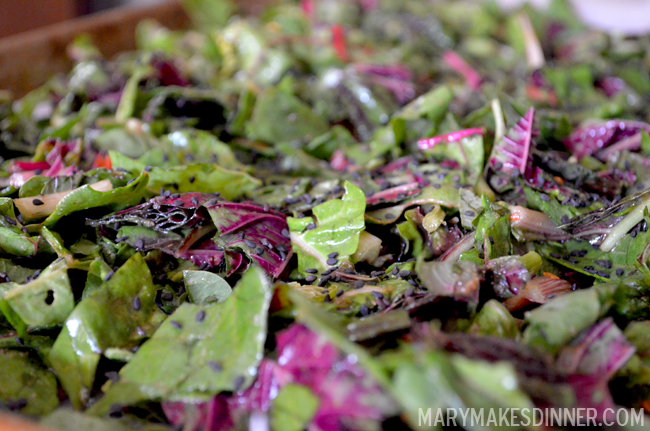 If you've ever wondered what I actually eat every day, you should probably be following me on Instagram. As my IG followers are acutely aware, veggie rice and noodle bowls are pretty much a staple part of my diet. I eat them mostly for lunch since the hus-beast has been on an anti-vegetable kick lately. (Ask me later how THAT'S working out. Guh.)

Anyway, I like to get at least two colors of veggies in each bowl I make. Greens are almost always color one. The second color rotates between orange sweet potatoes and carrots or red peppers. Yellow squash and purple peppers are also known to pop in now and then. Sometimes I feel like it needs an egg on top. Sometimes I'm not in the mood. Anyway, this is a pretty typical lunch or dinner for me.

I should warn you that this is a pretty intense veggie bowl. I hope you like greens. If not, you might want to start with something a little lighter, like spinach. Chard can be a little earthy, in the same way that beets can, and it's not everyone's cup of tea. Amaranth actually has a really interesting taste, most of which is covered up in this particular recipe. If you've never had amaranth, you might want to just saute it up with some sesame oil, salt, pepper and garlic instead of roasting it with the chard. In that case, I'd also reduce the amount of sauce you use on the chard. By half or so?

I like this bowl with a few squirts of sriracha and kewpie mayo. I have a serious kewpie habit. What can I say? If that isn't your thing, you could sub a few slices of fresh avocado or a drizzle of plain tahini to give this bowl a creamy touch. 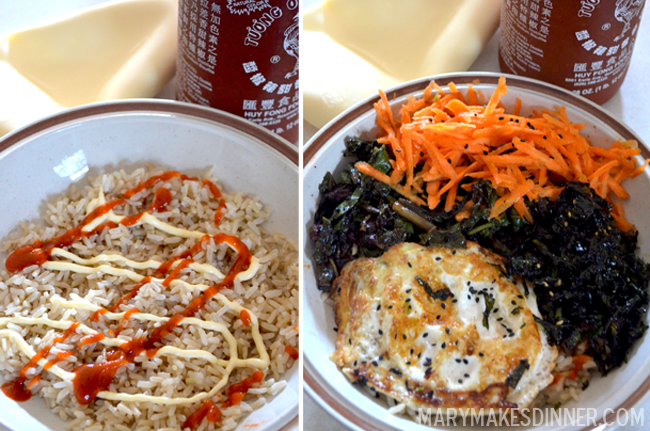 Full Disclosure: This post contains affiliate links. If you buy anything as a result of clicking on one of the links in this post, Mary Makes Dinner will earn a tiny, but much appreciated comission.

Love my posts? Help me out by sharing them with your friends!

09/11/2013 in About Me, Gluten-Free, Healthy Recipes, Main and Side Dishes, Mary Makes Dinner, Recipes, Vegan | Permalink