Here's Julie and P-Dub, lookin' adorable.
Update: My blog has been eating comments lately, and especially seems to enjoy eating comments on this post. My apologies to anyone whose comments I have not responded to. If it seems like I've been ignoring you, try sending me an email or hitting me up on Twitter. My handle is @MaryMakesDinner.

When I was a kid I had a sort-of fetish for fan clubs. I loved searching the back of magazines and books for those little square ads containing anonymous p.o. box addresses. Sometimes I would get lucky and find a little slip of paper inside an album jacket or some liner notes. The most thrilling, of course, were discovered on random book store bulletin boards, in coffee houses, or record shops. I didn't actually join these fan clubs. I guess that would have ruined their mystique, but I loved to fantasize about what it would be like to belong to one.

Lost in a pretend world, I would lay there imagining myself comparing notes with an army of Vertigo comic readers, swapping copies of the best, most rare issues, or sharing original sketches and fan fiction. Of course, Niel Gaiman would show up sooner or later and delight us with fresh stories, herbal tea, and unconditional love. It would be a true brotherhood, a haven in a world of people who just didn't get it.

I've only ever been officially a member one fan club, and that was a serious dissapointment. Every few months I'd receive a lone postcard from the Tori Amos fan club decorated with and orange-haired logo. A small spattering of news would fill the back of the card, perhaps tipping us off about new tour dates or an upcoming album release. It wasn't exactly the club of my dreams, but in hindsight, I think my expectations were a bit lofty.

In contrast, my adult life has been blessed with the presence of more substantial organizations. My long term readers might remember me co-founding The Hat City Scissor Squad way back when. It was a craft group based in Danbury, Connecticut. Every week we met up in a local bar to sew, knit, or crochet. After a few years the core members became very close, and our sessions became less about crafting and more about spending time together.

Here in Austin, I enjoy an extremely beneficial membership in The Austin Food Blogger Alliance. I really can never say enough about this group. It has helped me network, grow as a writer, become a better photographer, and most importantly, establish quite a few friendships that I have come to really treasure. With the exception of hero/celebrity storytelling sessions the group is everything I had hoped for in the dream clubs of my youth.

When I heard that the BlogHer Food conference was coming to Austin this year I dared to wonder, "could an even larger group of food bloggers share this magic too?" I quickly submitted a panel and waited patiently as the agenda was picked. I was delighted to make the cut, ending up on a great panel with Hilah and Stacie, two other bloggers that are doing really cool things with video.

A few months went by and there I was, bright and early on line to get my badge for BlogHer Food 13. Coffee, pastries, and a breakfast buffet greeted us at the early hour (well, early for me) of 8:00 am. Sponsor tables lined the hall, awarding loot to curious attendees, and pitching woo to bloggers. There was hustling. There was bustling. And more than plenty of chit chat.

After a quick greeting and conference overview, we were off to the races. I managed to stick to my orginal schedule pretty well, though I did end up doing a little panel-bouncing during a few of the sessions. Since the conference took place in my own city, I was well within my comfort zone most of the time. Familiar faces were around every corner, and even on many of the panels. I also noticed that many of the unfamilar faces weren't all that unfamiliar. We see eachother over Twitter, G+, and on our blogs every day. In a way, attending BlogHer Food was sort of like being surrounded by an army of floating heads that had suddenly found themselves with bodies. I mean that in the nicest way possible.

I did muster up the courage to introduce myself to many of those heads by way of their hands (shaking). I met so many marvelous bloggers that I am sure to be leaving several out, but I'm going to give this my best shot anyway. Thanks to my little collection of business cards and my much less dependable memory, I present you with a list of new blog friends that I met at BlogHer Food 13. May my linkage lure them back here to say "hello".

I even met a couple of famous bloggers. My friend Julie and I crashed a party so that we could say "howdy" to Ree Drummond, The Pioneer Woman. I was mortified at our own audacity, but Julie was all smiles. Have you met my friend, Julie? She's got one of those personalities that makes everyone instantly love her. She's like a walking ray of sunshine, a personified rainbow of light, a giggling fairy of happiness that also laughs at dirty jokes and tells you when you have seaweed in your teeth. Basically, she's the best ever.

Ree was extremely gracious, so much so that I got over myself and actually had a lovely conversation with her. She asked about our blogs. We compared freckles. Julie asked for a photo. It was a super positive experience. I refrained from gushing over her recipes, though I sort of wish I had told her how when my sister made her dinner rolls for Thanksgiving last year they were so good that people started hiding them under napkins and stuffing them in their bags to take home!

Jaden from Steamy Kitchen actually walked up to US! Julie and I, that is. I'm telling you, everyone wants to hang out with Julie! If I'm ever on an exploding spaceship I hope to be holding hands with Julie in line for the escape pods. I know I'm not getting in there based on my own merit. Anyway, Jaden was also super nice and friendly. Our interaction was pretty brief since she was just about to leave for another meeting.

Irvin from Eat the Love was also a bit of a celebrity this year thanks to an awesomely funny blog post he put out right before the conference. He confessed that he was unlikely to remember bloggers who were either white or female, so naturally every white female blogger who read the post made it a point to seek him out. He had a really great sense of humor about it, even though I am sure he was really tired of hearing the same jokes by the end of the weekend. You totally remember ME though, right Irvin? But seriously, he'll probably remember Julie.

Oh, and did I mention parties? We partied a lot that weekend, like a whole lot. I'm a poor journalist when there is alcohol involved so photo evidence is limited. Nevertheless, I'm happy to give you the small morsels I managed to scrape up. 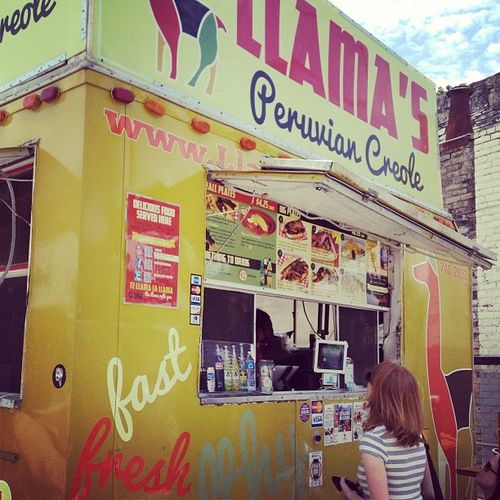 Drinking cocktails and scarfing cobbler at the Mango Happy Hour.

Then, of course, there was the closing party at Stubb's. Ohhhhh mama. There was ice cream, barbecue, even some veggie options (pictured below). All in all, I'd say I had a damn swell time at BlogHer Food 13. I made lots of new friends, learned tons of great stuff, and walked away with more loot than I could carry. I was feeling the blog-love for real. See you next year, folks! 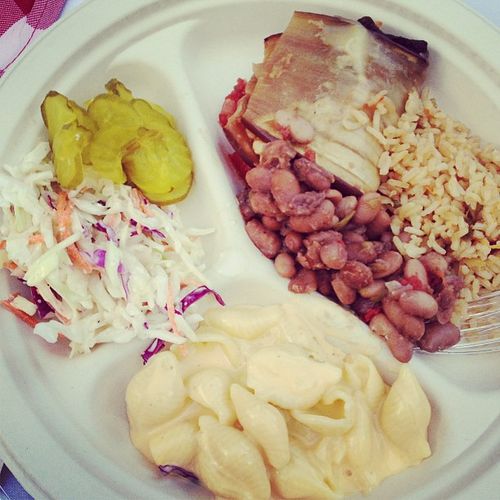 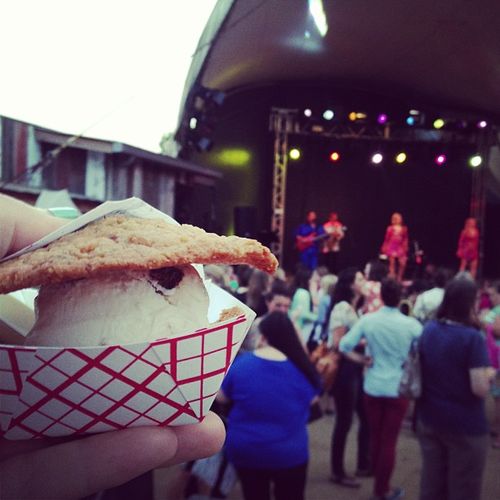 By the way, the band that played at the BlogHer Food closing party was beyond hilarious. A silk pajama cover band with lots of thrust-power. Turn the sound on. I dare you.