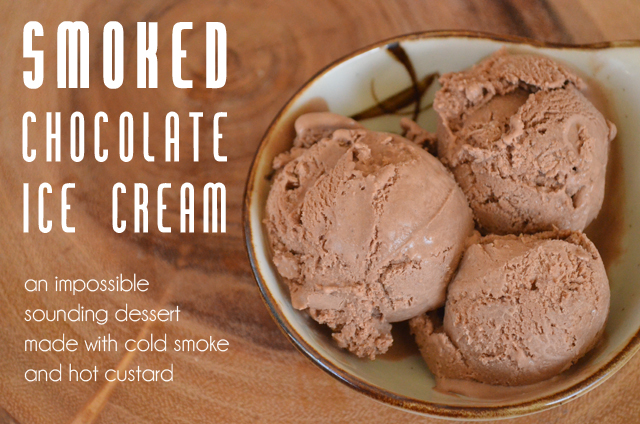 OK, so this is one of those ridiculous sounding recipes that you'll be all "Is she for real?!" about, but I am telling you, the silly amount of work that goes into it is totally worth it. While smoked chocolate sounds a little strange, it tastes surprisingly good. If you didn't know that it was made with smoked chocolate, you would probably find yourself unable to place that mysterious element that gives this ice cream a sort of ethereal, hot cocoa flavor. Top this bad boy with some nuts and marshmallows, and you'll have yourself a heavenly hash that totally knocks it out of the park.

When I made this, it was a component in a food competition, meaning that I had to come up with 500+ scoops for my event. With the interest of economy in mind, I cold-smoked the chocolate myself. While the process was actually fairly simple, I could have saved myself a lot of time and effort by ordering pre-smoked chocolate online from Hot Cakes Molten Chocolate Cakery. They sell bags of smoked chocolate that will simplify this recipe quite a bit.

If you insist on doing things the hard way, get yourself an electric smoker or a smoke gun. I used an electric smoker box, and put a tray of ice on the lowest rack, right over the wood chips and heating coil. This kept the temperature inside the box, which doesn't get terribly hot anyway, from getting hot at all. The result was what barbecue afficianados would call "cold smoke". Chocolate scorches in high temperatures, and "burnt" is not the taste I was going for. I wouldn't recommend trying to smoke chocolate in a grill smoker, or in any other high heat situation.

I used applewood chips and pecans to smoke my first batch, but for some reason that escapes my understanding they gave the chocolate a kind of gross flavor. I don't know how to describe it beyond the words "bad smoke". That batch went into the trash. On my next run I used hickory chips. Lo and behold, the flavor worked. I soaked the chips in cold water for about an hour, then began smoking the chocolate with them while they were nice and sopping wet.

I smoked the chocolate for about 45 minutes, then attempted to temper it on my stove top. Tempering chocolate is important at this stage. Weird things being to happen to the texture of chocolate when it encounters heat. If it isn't melted and remelted in just the right way it can become crumbly, mushy, and ashy. Despite my best efforts, I couldn't get the chocolate to temper properly after being smoked. I had hoped to use some of it in a chocolate and smoked cherry bark, but no dice. The untempered chocolate did work well, however, in the ice cream.

The moral of that story is this: if you've got the scratch, just buy your smoked chocolate from the pros and call it a day. If you are a glutton for punishment, go ahead and get your smoke on.

Now, on to the ice cream! This recipe is inspired, as most of mine are, by the formulas from Jeni's Splendid Ice Creams

. By beautiful coincidence, Jeni's actually had a truck in Austin for SXSW this year, and I was able to make two pilgrimages to my ice cream mecca. If you haven't had Jeni's, or at least made a recipe from her book

, you are seriously missing out. It is the best ice cream on Earth, no lie.

The base is what I call "Ohio style", in honor of it's genius inventor, Jeni Britton. Cream cheese and corn syrup are used to emulsify the milk and butterfat into something unbelievable smooth, rich, and delightful. A chocolate sauce is concocted from smoked chocolate, brewed coffee, and sugar, then blended into that super rich and creamy base. The result is a rich, aromatic ice cream that possesses a quality that you can't quite put your finger on, something that reminds you of camping and cozy fireside snuggling. 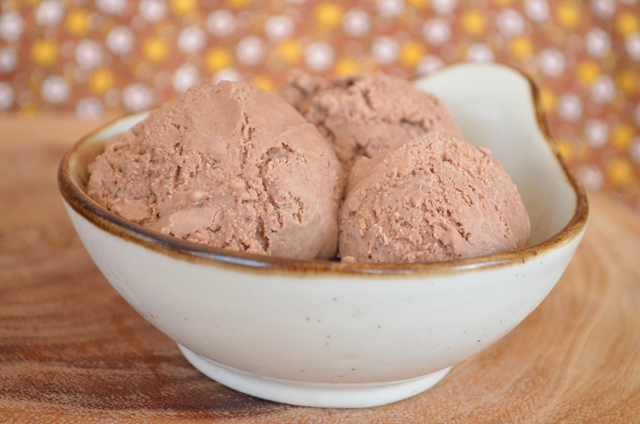