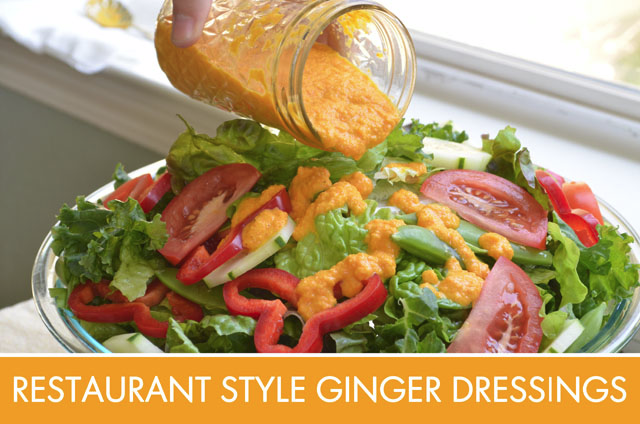 It might sound a little silly, but when I go out for sushi, one of the things I look forward to most is the salad.  Most sushi places offer the same old, same old, a tiny bowl of chopped romaine, carrots, and red cabbage, topped with an orange blob of ginger dressing.  Ordinary?  Quite.  But there is something magical in the predictable simplicity of a ginger garden salads.

Though there are probably thousands of recipes out there for ginger dressing, most fall into two categories: creamy and chunky.  Both have their virtues, but like anything, everyone has a favorite.  During my years in the Japanese restaurant biz, I learned how to make both.  A bumper crop on carrots inspired me to finally hammer down recipes for each.  Enjoy! 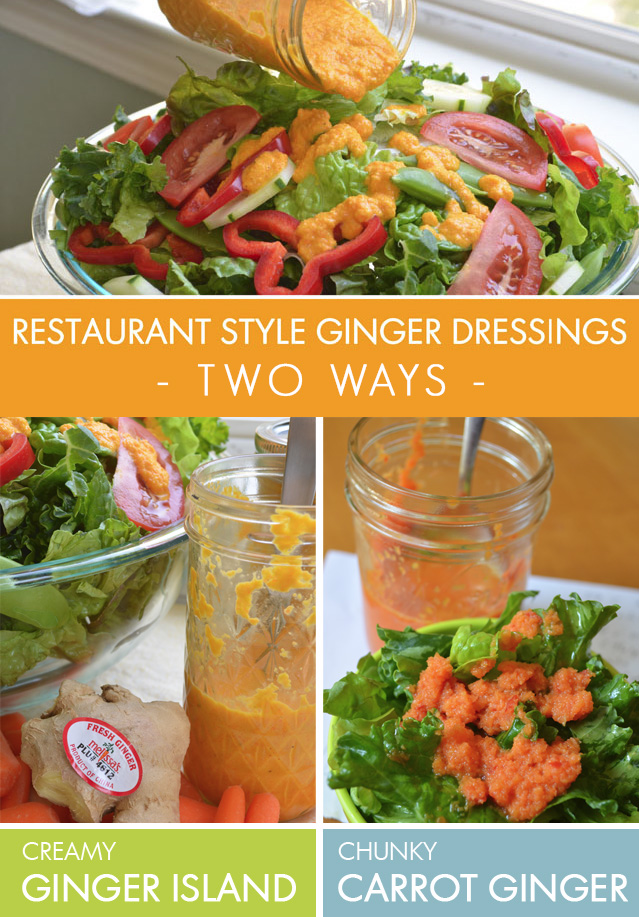 The first of these dressings is one that I like to call "Ginger Island Dressing".  I learned the secret to this dressing through inconspicuous observation during my years at Kabuki, in Danbury, CT.  I had to learn the recipe this way because Yoshiji, our head sushi chef, maintained that this was a secret family recipe, not for the eyes of a prying, silly girl, such as myself.  This might make Yoshiji sound like a mean old crankpot, but really, he was just old fashioned.  As cranky as he could be, he was also one of the sweetest, gentlest, and most good natured people I've ever had the pleasure of knowing.  He loved books, quiet, and making sushi how it ought to be made, every time.

This is my version of his secret family recipe, something between carrot ginger dressing and thousand island.  Just imagine my surprise when I snuck into the kitchen between shifts to discover Yoshiji pouring a huge can of ketchup into the food processor.  I wanted to ask how on earth ketchup made its way into an ancient family recipe, but my curiosity remained unsatisfied, lest I betray my unauthorized presence.

Directions
Toss everything into a blender or food processor, and puree until smooth. Add salt and pepper to taste. 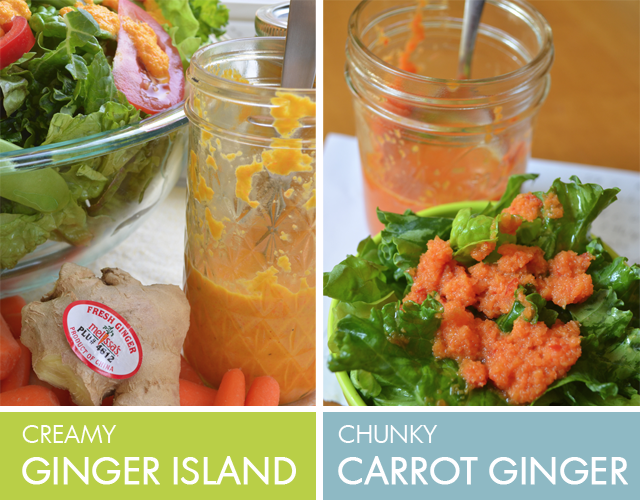 The next dressing I have to share is a little more common. It's hard to say which of these is my favorite. I love them both, but sometimes I'm in the mood for something that tastes extra fresh. This raw dressing is just the thing. It separates almost instantly, leaving a delicious, carrot-flavored puddle at the bottom of your salad bowl. I learned to make this dressing at Sushi Yoshi, my first Japanese restaurant job.

The kitchen at Sushi Yoshi was run by a boisterous family of Hondurans. Loud music, bawdy jokes, and spontaneous dance breaks were my first clues that the back of the house might just be having more fun than the front of the house. Making ginger dressing was usually Novia's job. Novia was sassy as hell, and though we didn't speak many of the same words, she could really crack me up. Later, as I learned to speak more Spanish, I found out that Novia actually means "wife" or "girlfriend", so I'm not entirely sure whether I ever knew her real name. Never the less, this is, more or less, how she made ginger dressing.

Directions
Combine the ingredients in a blender or food processor, and pulse until the carrots and peppers have broken down into tiny pieces. Add salt to taste. Shake well before serving.