Last year I entered my first cooking competition, The Austin Pork Experiment.  I had a blast, and I learned a lot, but when it came time to award prizes I walked away empty handed.  One year later, I came back for another shot at victory.  I dreamed of taking home the grand prize, but I knew that my competition would be steep.  People in this town love to cook, and they aren't afraid to mix things up.  So, I decided to focus on what I do best, and that is making ice cream. 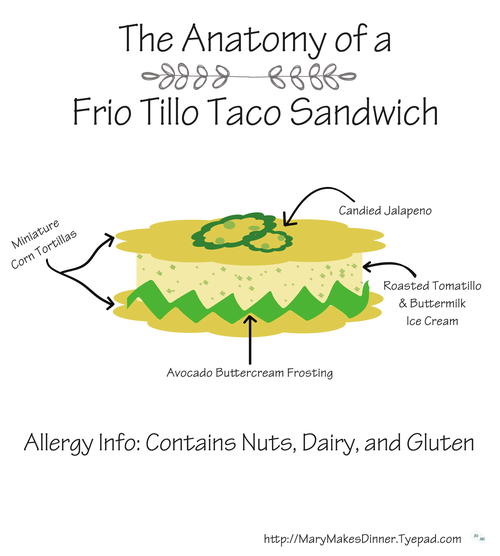 The star of my entry was a very unique ice cream made with sweet roasted tomatillos, and tangy buttermilk.  To transform it into a taco, I slathered it in avocado frosting, and sandwiched it in between two corn tortillas.  I topped each cute, scalloped sandwich with candied jalapenos, and hoped for the best.  My biggest struggle was in the shell.  I tried everything from cookies to chips to tortillas, but nothing seemed to work.  I have theories on corn flavored pizelles or macarons, but time escaped me in the end and I went with the best option I had.

It was the ice cream itself, I think, that won the heart of The Food Experiment, and bestowed upon me the honorable title of "most experimented".  I placed!  I won prizes!  It might not have been the grand prize, but when my name was called I was in seventh heaven, and apparently behaved like the grade-A jackass that I am upon acceptance of my prize.  Look at this. 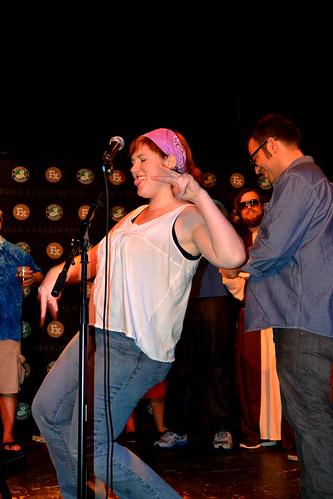 I mean really.  Something must be wrong with me.  Who acts like this?

Anyway, the ice cream was BOSS, and I was asked repeatedly whether or not I was selling it.  The answer is both yes and no.  I have decided, after about two years of consideration, to open my own small time, artisan ice cream business, but it will still be a while before it is all legal and operating.  In the mean time, I am more than happy to spread the love through classes and recipes.  I can even make you some ice cream in exchange for bartered services or donations.  Drop me an email and we'll talk.  By the way, if you think this ice cream is good, this is just the beginning.  I can make something awesome out of just about anything.  Seasonal, special diet, bring it on.  I am an ice cream ninja.

Without further ado, I give you the recipe I promised so very many people at The Austin Taco Experiment.  This is an Ohio style ice cream, based on a strawberry ice cream recipe by Jeni Britton.  I hoped that tomatillo and strawberry shared a similar enough sweet and sour vibe for this to work, and it totally did.  Thanks to Jeni's genius, super emulsifying base, tomatillo ice cream was a success.

Preheat the oven to 350 degrees.  Toss the tomatillos with 1/4 cup sugar and the juice of 1 lime.  Transfer to baking dish and roast until the tomatillos are tender, about 20 minutes.  Allow them to cool a little, then puree them in a blender or food processor.  Reserve 1/2 cup for the recipe, and store the rest for another use.  (You can make an awesome jelly or syrup from them.)

Mix the cornstarch with 1/2 cup of milk, making sure it dissolves completely.  Put the rest of the milk, along with the heavy cream and the sugar in a large saucepan.  Bring the mixture to a boil, then reduce to a simmer and cook for 8 minutes.  Remove from heat, and stir in the starch/milk mixture.  Return the pan to the heat and simmer for 3 minutes.

In a heat proof mixing bowl, combine the cream cheese and salt.  Slowly mix the hot milk/sugar mixture into the cheese, making sure that it all mixes evenly.  Next, stir in the buttermilk and the tomatillo puree.  Cool as quickly as possible, using an ice bath if you can, then transfer to the fridge.  Chill the mixture for at least two hours, then churn according to your ice cream machine's directions.

By the way, to find out more about the folks who took home the big prizes that day, (all of which were stupendous) check out the following articles from around the web.

Also, I just want to say THANK YOU to my wonderful sisters, Sarah and Heather, who helped me cut tortillas, assemble sandwiches, and keep my cool throughout a very long, very fun weekend.  You two are great!  And pretty!  And nice!  Thanks!!