I've been at it all day.  Creating and testing recipes is hard work.  Don't let anyone fool you.  For every recipe that gets posted on this blog, there have been at least 2 or 3 versions of it made.  Each time it is whipped up, it gets tweaked, nudged, poked, corrected.  Sometimes it just gets canned.  In fact, I would be curious to see what ratio of recipes survive the testing phase at all.  I would guess it at at least 25%. 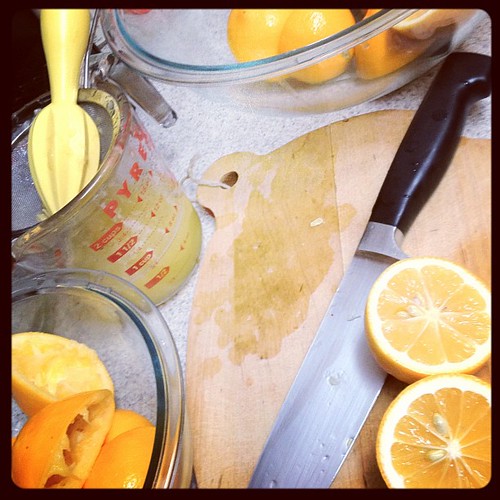 And that, my dear people, is what makes cooking both wonderfully rewarding and unequivocally frustrating.  Today, for example, I decided to work on Meyer lemon recipes, vegan ice creams, and veggie chips.  Some things worked out really well, like the seasoning on my sweet potato chips. (Cinnamon and chipotle!)  Other things are off to a good, but uncertain start, like my vegan ice creams.  Other things just flopped.  It turns out that cajun seasoning and turnips were never meant to be together.  Never ever.

I also discovered that if you let tapioca starch cook for too long in coconut milk you will wind up with a kind of coconut boba.  If you're unfamiliar with boba, it is usually just boiled tapioca pearls that get added to tea and milk drinks.  It's all the rage with the young people these days, as are most exclusively Asian trends at one time or another.  Anyway, my unscheduled pot of boba got the wheels turning in my mind.  I have to let the seed of creativity sit for a while and take root, but I think I'll be reaching for that tapioca starch again soon.  Tapioca jello shots? 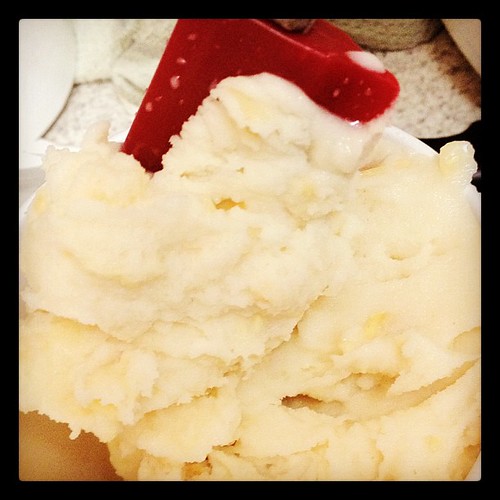 As for the batches of ice cream base that did well, so far one of three has been churned and is sitting in the freezer firming up.  This particular beauty was the one that served as inspiration for the entire project.  I wanted to make Meyer Lemon Ice Cream, but I knew that the juice would be too tart on its own.  So, I blended it with some organic apple juice, and honey, added a touch of vanilla, and stirred in toasted almonds at the end.  It's no longer truly vegan, but I'm sure agave nectar would work just as well in place of the honey.  The next ones in line to churn are Cranberry Cardamom, and Lemon Chamomile with Garden Mint.  I'm going to have to invite some friends over for taste tests!  By the way, if you'd like to experiment, here's the Kitchn recipe that got me started.

Some of my veggie chips turned out really well, like these beet chips. 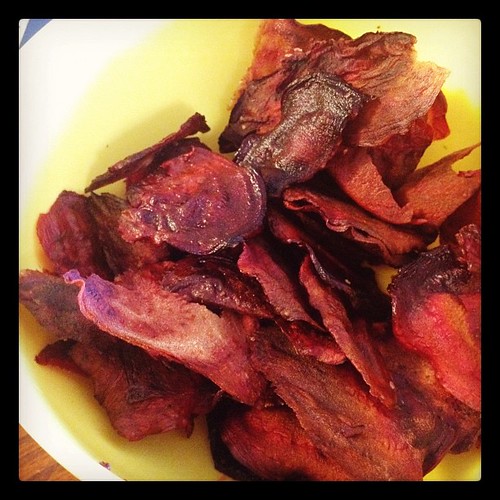 The beet chips, which were inspired by Cozy Kitchen's beet chip recipe, inspired a series of experiments with turnips, sweet potatoes, and eggplant.  The sweet potato chips are very close to perfect, but will have to be re-tested with a couple of variations. 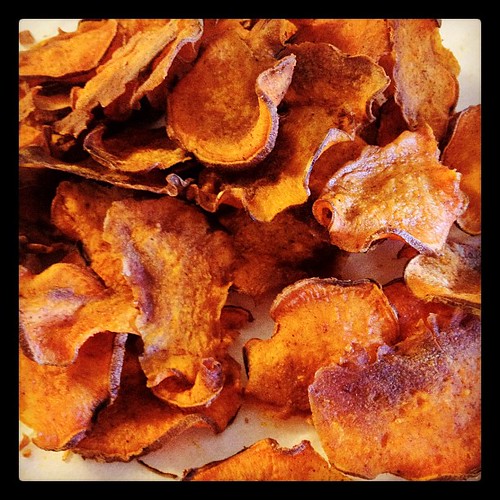 The turnips were a total bust.  Something wonderful, but unexpected happened with the eggplant.  After roasting 1/4" thick slices for 45 minutes I was left with some incredibly tasty medallions, but definitely not chips.  My Mom made a batch simultaneously that were cut much thinner. (Whoa, internet!) Hers were floppy and burnt.  Back to the drawing board for the chips.  The medallions, however, tasted great!  I threw them on top of a salad for lunch, and dreamed about putting them on top of a sandwich. 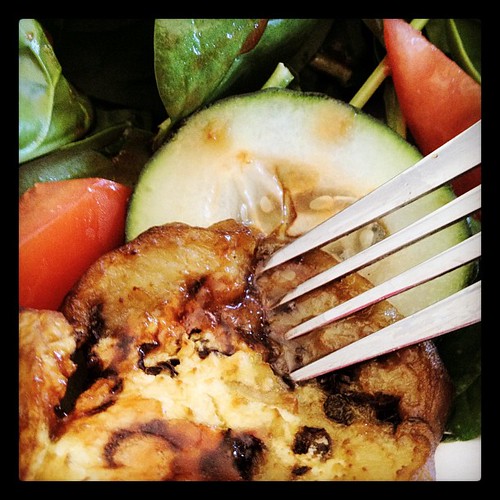 Quick recipe for the eggplant:

* Slice eggplants 1/4" thick.
* Combine 1 teaspoon minced rosemary, 1 teaspoon lemon zest, and 1 teaspoon kosher salt in a mortar & pestle, then smash the dickens out of them.
* Toss the sliced eggplant with 2 tablespoons of oil, and with the salt mixture.
* Place them onto a parchment lined baking sheet (or two) and roast at 350 for 40 - 50 minutes.
* Devour while they are hot and juicy. They are great on salad or pasta, or in wrap or sandwich. 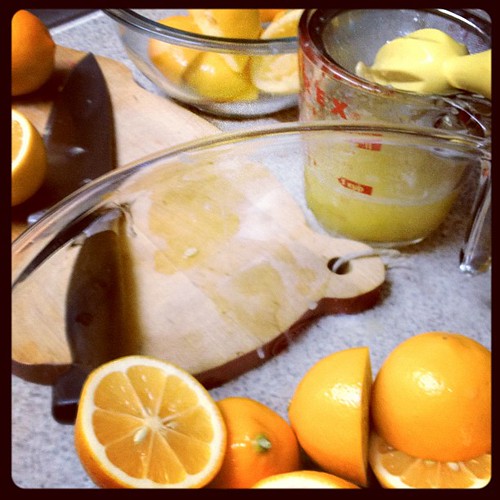 Still ahead this weekend:

01/14/2012 in Main and Side Dishes, Mary Makes Dinner, Recipes, Thinking About Food | Permalink