This simple cold salad is a fairly straightforward interpretation of the kind of side dish you are likely to be served in almost any Chinese restaurant in Beijing.  Cucumber Salad is sometimes cool and refreshing, and other times mind-blowingly spicy.  In some restaurants you'll find extremely simple Cucumber Salads, some consisting simply of cucumber and vinegar.  At the next place you could be served something equally complicated.  My interpretation blends two of my favorite Chinese ingredients in a simple dressing that I learned to make while in Beijing. Enoy! 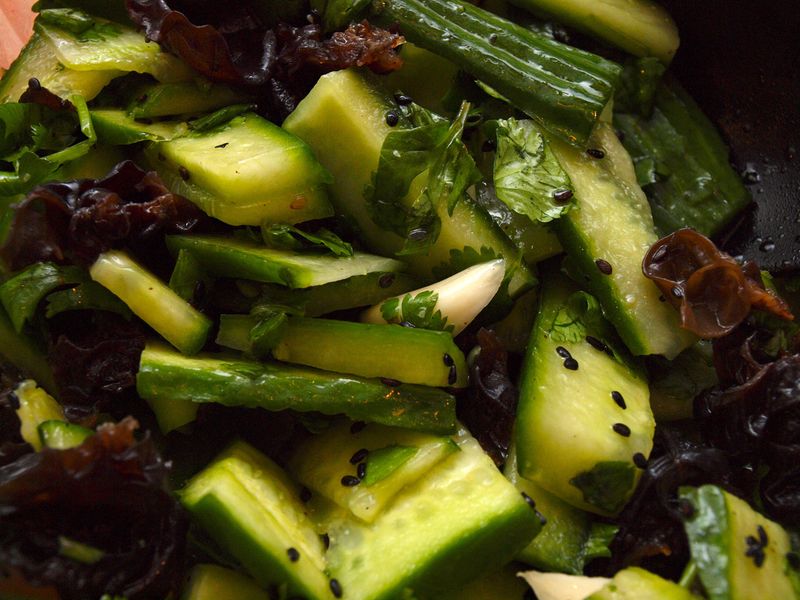 Directions Start by mixing your dressing.  Combine the oils, vinegar, and sugar in a small bowl and whisk them until the sugar dissolves.  Give it a quick taste, and adjust it if necessary.  Add the garlic and chile peppers to the dressing and set it aside.  Next, chop the mushrooms into bite sized pieces and toss them into a large mixing bowl.  Chop the Cilantro leaves coarsely and add them to the bowl.  Now it's time for your cucumbers.  Chop your cucumber into bite sized sticks, similar in shape to carrot sticks, but about half the length.  Toss them into the mixing bowl as well and mix them together with the mushrooms and cilantro.  Add the dressing (freshly whisked) and sesame seeds right before serving the salad.  Keep the dry salad cool and covered while you are waiting to serve it.