How to Make Yummy Chinese Dumplings

Update: This recipe is being featured in my upcoming oline classes:

Join me in class to cook this recipe with me live!  I'll be there, step by step to answer any questions you might have about living in Beijing, Chinese cooking, dumpling making, or food in general!

While I was in China, I learned a bit about Chinese cooking at a place called The Hutong.   It's a very cool little Arts Center that focuses on culture, art, wellness, and much to my delight, cooking!  My very first class at The Hutong was on Dumpling Making.  Dumplings, as you may or may not know, kick ass.  They are delicious little pockets of joy and can be made in countless varieties, including some very tasty vegetarian/vegan combinations.  I've made them since the class, most recently for my sister, Heather's birthday dinner.  I'm no professional.  In fact, my dumplings tend to look a little wonky.  Sophia, my dumpling teacher, told me that Chinese people call dumplings like mine "ass dumplings" (since they look like doughy little derrieres).  Well, they may look like hineys, but they taste like heaven.  That's what counts, right? By the way, these types of dumplings are called Jaozi (pronounced sort of like jow-zuh, but not quite). They are quite a bit like Pot Stickers or Japanese Gyoza. So, without further ado, here is a crash coarse in dumpling making, ala me, based on what I learned at The Hutong.  I won't repost their complete recipe, but I can give you a pretty in depth run down.  If you have any questions, please let me know!  I'm happy to help. 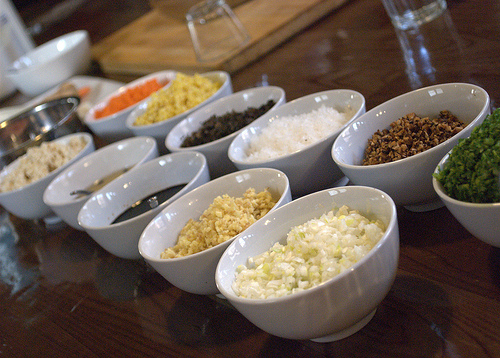 When we arrived, our teacher, Sophia, had laid out a spread of ingredients in small white bowls.  We were encouraged to sniff and taste each ingredient (expect the raw meat, of course) and learned a little about each one, and how it was prepped for inclusion in the dumplings:

Pork: The raw pork was ground, like hamburger meat.  Sophia told us that it is best to find pork that is heavily marbled with fat when making dumplings, as the fat is necessary for a smooth texture.

Eggs: These were scrambled in a hot wok with a little salt and oil, then chopped finely.

Tofu: Sophia used a very firm, but in all other regards, basic white tofu.  It was crumbled, then stir fried in oil to reduce its moisture.

Carrots: The carrots we used were minced in a juicer, but you can also use a food processor, or (heaven help you) a veggie peeler and knife to achieve the same, finely minced texture.

Pepper Oil: Pepper Oil is made by infusing dried flower peppers (red or green depending on personal taste) in oil.  Sophia uses a plain Soybean Oil and Red Flower Peppers and heats them over a low flame in her wok.  You can strain the Flower Peppers out of the oil when it cools, or leave them in it for visual flair.  But don't let them wind up inside your dumplings. That would not be so nice. 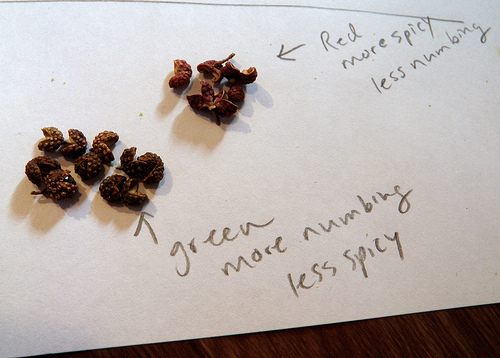 Black Wood Fungus: Also called "Wood Ear Fungus", these mushrooms are purchased dried and then reconstituted using room temperature salted water.  The dried fungus looks like a black rose, but after it is hydrated it looks more like a squashy pile of seaweed.  Mince it finely after it is hydrated for use in dumplings. On a side note, according to Sophia, these mushrooms are used to cool the body, and cleanse the digestive system in Chinese medicine.  They can supposedly help with gall stones and other various digestive issues, but should be avoided if you are an overly chilly person.

Dark Soy Sauce: A thick, dark, and intensely flavored soy sauce that is usually used on meats. This is used only with meat dumplings, as the flavor is too strong for veggies.

Glass Noodle: Sophia had a good time making us guess what these stiff, white noodles were made of.  Our guesses included: rice, radish, and vermicelli, but were all totally wrong.  These special noodles are made from green beans and peas.  They become totally clear when cooked, and have a very unique, elastic-like texture.  They should be boiled for 3-5 minutes, or until they become totally transparent, then drained, but not rinsed.  When they cool enough to handle them, chop them into little, 1/2 centimeter bits.

Ginger: We used fresh, finely diced ginger, but Sophia assured us that you can also use dried ginger or crystallized ginger according to your taste.  An interesting note, the preparation of ginger, as well as the part of the ginger root used, affects is purpose when it comes to Chinese Medicine.

Shitake Mushroom: In China, these little brown mushrooms are readily available both fresh and dried.  According to Sophia, the dried mushrooms have a better flavor for dumplings, so we used the dried kind.  These are hydrated the same way the Black Wood Fungus is – in room temperature salt water.

Scallions (Chinese Leeks): In China they have these enormous scallions, which they call either chives or scallions in English.  I am not sure, but I think they might be closer to leeks in actuality.  They use them constantly in Chinese cuisine.  For dumplings, they chop them very finely.  You can also use regular old scallions if you prefer.

Mystery Greens: There is a very dark green leaf that is minced and added very commonly to dumplings in Beijing.  Our teacher, Sophia, called it Dill at first, but after we all smelled it we decided it definitely could not be dill.  She used the word “fennel” next, but I’m still not 100% percent sure it was fennel.  It had a slightly herbaceous, lemony aroma, but has a texture similar to spinach once its cooked. Up until the class I had assumed it was spinach or the dark leafed baby Chinese cabbage that I saw everywhere I went.

To make Veggie Dumpling Filling, you simply mix and match any non-meat fillings you like, then top them off with some Pepper Oil and a little salt.  (Tip: Dark Soy Sauce isn't very good in veggie dumplings, AND if you are not a vegan, you may want to add a little egg white and whip the mixture up to make it a little more firm.)

For meat dumplings, the process is a wee bit more standardized.  First, stir in a few teaspoons of Dark Soy Sauce into the meat, followed by the minced scallions, and some salt.  Crack an egg white into the mix and stir (in only one direction) until the egg whites whip up and get the mixture nice and sticky.  Once the mixture has gotten nice and firm, you can add your Mystery Greens and some Pepper Oil.  Add more Salt and Soy Sauce to taste, and maybe a little ginger if the mood strikes you.

The dough is very basic, just flour and water, kneaded into a soft, but not sticky ball.  After you finish kneading the dough, set it aside covered with a bowl or in a lidded dish for about 10 minutes.  You can enhance the nutritional value of the dough (as well as the appearance) by using vegetable juice in place of water.  We used carrot juice and spinach juice, but there are countless other juices that could be used as well.  Beet juice, for instance, would create lovely purple dumplings. 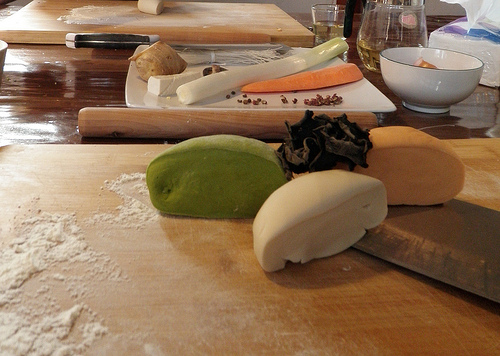 Once the dumpling dough is ready, it is rolled into a tube that measures a little less than an inch in diameter.  The tube is then chopped into 1 inch nuggets and dusted with dry flour.  We rounded the nuggets, then flattened them into discs using the palms of our hands.  You could probably use a cup or a mallet to get more perfect discs, but I’m not sure that’s really necessary.  The tricky part comes next.  You’ll need to flour your work surface, and get yourself a very small rolling pin.  Pinch one edge of your disc, then roll firmly into the center on three sides, (rotating each time).  Continue to roll the pin in very deep on each turn until you get your disc to be about 3 inches or so wide.  The goal is to make the inside of the disc thicker than the outside, so that the bit that holds the filling is strong, and the excess dumpling isn’t too chewy.  This took some practice, and for later inspiration, I took a short video of Sophia rolling her dough like an expert.

Another slightly tricky part, filling and folding the dumplings is a delicate art.  To a perfectionist, this activity could be maddening, but if you simply want to get that sucker closed, it’s not so hard.  Lay the wrapper flat in your palm, then use your other hand to scoop the filling into the middle. Not too much, not too little.  Pinch the middle of the wrapper closed first, then carefully pinch one of the edges together, and fold the remaining opening in the same direction that you folded the edge.  Repeat on the other side, and viola! Your little joazi is ready to go. 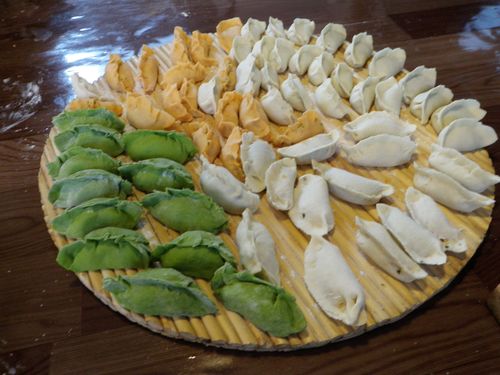 After we had a platter full of dumplings which ranged in beauty from flawless to lumpy and weird (“Sexy Ass Dumplings" as Sophia says) we boiled ourselves a wok fill of water and dumped those suckers in!  This part excited me, can you tell?  I love boiling things in woks.  The steam!  The danger!  It’s really pretty thrilling.  Anyway, we boiled them until, and I quote, “they sink to the bottom, then rise to the top, then sink to the bottom again, then rise again, then sink and rise once more.”  Another clue to tell that they had finished cooking was to look at their shape.  Dumplings puff up while they cook, and when they’ve finished they shrink up like saran wrap.  You can also poke at the meat ones a bit to see how firm they are. 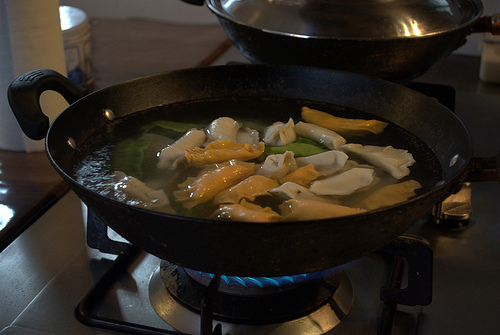 We also pan fried some, which were really really delicious.  To pan fry the dumplings, you heat oil in a wok, then place the raw dumplings in the pan, standing on their little dumpling bottoms.  Let them cook for a bit, until they become golden down below, then add a generous portion of water, and cover then pan.  You’ll know their finished based on the aforementioned saran wrap and poke tests, but you cannot, unfortunately rely on the sink and rise test this time.

Jaozi are meant to be dipped!  They are most commonly, if not always, served with malt vinegar.  Most folks toss some hot chili pepper and sesame oil into the mix. (Myself included) And some people even like to add a little plain soy sauce to the equation.  Any way you dip them though, they should be pretty ding dang tasty.

Find Pork Pot Sticker and Dumpling Recipes from other bloggers on Foodista by clicking the link below: